Hoppe: The Democratic State Is Satanic 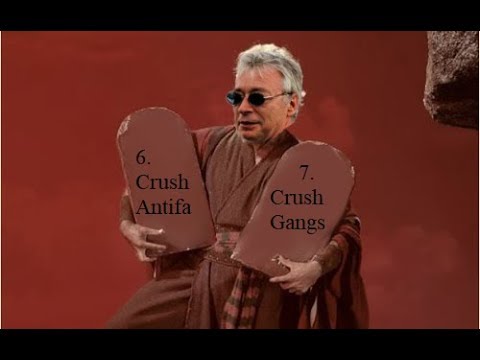 Middle Ages represents a large-scale and long-lasting historical example of a stateless society and as such represents the polar opposite of the present, statist social order. Indeed, the Middle Ages, notwithstanding its many imperfections, can be identified as a God-pleasing—a gott-gefaellige—social order, whereas the present democratic state order, notwithstanding its numerous achievements, stands in constant violation of God’s commandments and must be identified as a satanic order. To answer the question, then, Satan and his earthly followers will of course go all out to make us ignore and forget about God and belittle, besmirch, and denigrate everything and anything that shows His hand.

This is all the more reason for any libertarian and God-pleasing “Catholic” to study and draw inspiration from this historical period of the European Middle Ages—something, incidentally, made easier nowadays and likely to encounter little opposition from the powers that be and their increasingly rigorously enforced speech code of “political correctness,” because any such study has long since been relegated to the status of a nerdy, quaint, and exotic interest, far distant in time from the present and without any contemporary relevance.

In standard (orthodox) history we are told, as a quasi-axiomatic truth, that the institution of the state is necessary and indispensable for the maintenance of social peace. The study of the Middle Ages and Latin Christendom shows that this is untrue, a historical myth, and how, for a lengthy historical period, peace was successfully maintained without a state and thus without open renunciation of libertarian and biblical precepts.

Although many libertarians fancy an anarchic social order as a largely horizontal order without hierarchies and different ranks of authority—as “antiauthoritarian”—the medieval example of a stateless society teaches otherwise. Peace was not maintained by the absence of hierarchies and ranks of authority, but by the absence of anything but social authority and ranks of social authority. Indeed, in contrast to the present order, which essentially recognizes only one authority, that of the state, the Middle Ages were characterized by a great multitude of competing, cooperating, overlapping and hierarchically ordered ranks of social authority. There was the authority of the heads of family households and of various kinship groups.

There were patrons, lords, overlords, feudal kings with their estates, their vassals, and the vassals of vassals. There were countless different and separate communities and towns, and a huge variety of religious, artistic, professional, and social orders, councils, assemblies, guilds, associations, and clubs, each with its own rules, hierarchies and rank orders. In addition, and of utmost importance, there were the authorities of the local priest, the more distant bishop, and of the Pope in Rome.

“Feudal law” reflected this “hierarchic-anarchic” social structure of the Middle Ages. All of law was essentially private law (i.e., law applying to persons and person-to-person interactions), all of litigation was between a personal defendant and a personal plaintiff , and punishment typically involved the payment of some specified material compensation by the offender to his victim or his lawful successor. However, this central characteristic of the Middle Ages as a historical model of a private law society did not mean that feudal law was some sort of unitary, coherent, and consistent legal system. To the contrary, feudal law allowed for a great variety of locally and regionally different laws and customs, and the difference in the treatment of similar offenses in different localities could be quite drastic. Yet at the same time, with the Catholic Church and the Scholastic teachings of the natural law, there was an overarching institutional framework and moral reference system in place to serve as a morally unifying force, constraining and moderating the range of variation between the laws of different localities. (Hans-Hermann Hoppe. The Great Fiction, p. 481-483)