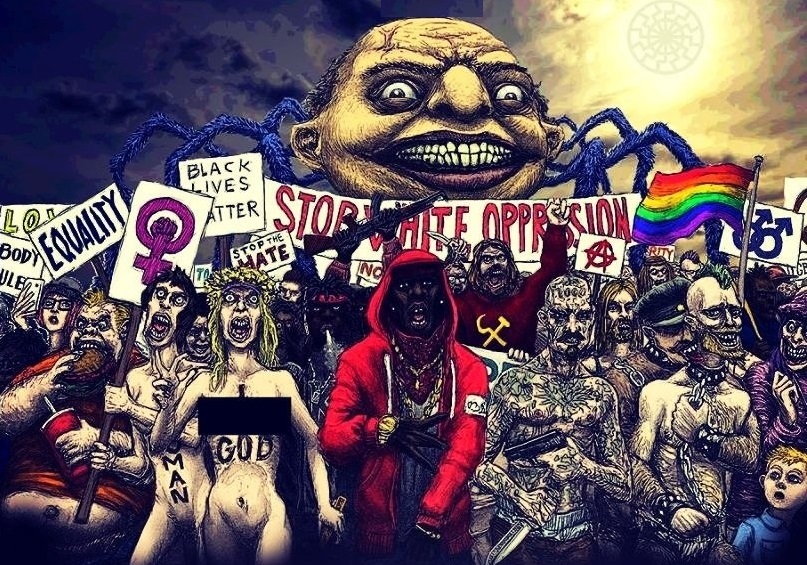 Here you find the most important articles on the Parasite Theory of History and the Jewish problem. They are so politically incorrect that only Holy Crusade News dares to publish them. In many countries you go to jail if you publish or share any of these articles. Truth is too dangerous for the ruling elite.

Laws of history
Understanding history requires understanding of scientific principles. Rationalist science including sociobiology and praxeology helps us see how monopolies in law and money made it possible for extremist Jews to achieve state capture. This is an introductory chapter article that goes through world history by listing various books and other rationalist sources. You can skip this article if you are not interested in philosophy and the radical Rationalist school in general. The Jewish Cuckoo story is so simple that it does not depend on specific philosophy of science.

THE MOST IMPORTANT STORY EVER TOLD.

A SIMPLE BUT TERRIFYING STORY.

Below you can read more about each of the 5 steps:

1. Jewish Problem and the Holy Roman Empire
This article studies the first step, the Jewish Problem in detail. Whites developed a Germanic free society in the Middle Ages but then rich Jewish traders entered Europe. Instead of assimilating they started to buy and transport White slaves to the South. Then they allied with the White rulers and bought from them various privileges such as tax collection, cartels and monopolies including a banking cartel. The exploited Whites often rebelled but still most European rulers like the French kings continued their alliance with the Jews against the natives. Jews then helped these Western European rulers so much that states became powerful enough to destroy liberty and all those defending it, including the Templars. The result was continuous wars, economic depression, Black Death and the birth of the modern state.

2. The 10 Steps of the Jewish Fatal Embrace
The first article explained how the Jewish refusal to assimilate created the Fatal Embrace in the Middle Ages. This article explains in more detail the 10 most important steps of the Fatal Embrace: First Jews bought privileges to 1) slave trading, 2) tax collecting, 3) monopolies and cartels. This drove many natives into 4) bankruptcy and confiscations, which led to 5) pogroms and 6) expulsions of the Jews after which some Jews made 7) an alliance with Muslims and others returned and helped create 8) a fractional reserve banking system, i.e. a money machine and became part of the 9) ruling elite which led to a 10) backlash especially during World War II.
3. The 10 Steps of the Culture of Critique
While Jews became ever more powerful they were afraid of a White backlash. This is why they started to weaken the cohesion of Whites by undermining the culture of the Western civilization with egalitarianism and relativism in 1. science (historicism, empiricism), 2. psychology (Freudianism), 3. morality (secularism), 4. ethics (subjectivism), 5. art (avant-garde) so that it was then easier to promote 6. multiculturalism, 7. cosmopolitanism, 8. Open borders and the 9. Critical theory in order to create 10. Globalism.

4. How U$Srael Rules the World? The 6 Steps to Global Hegemony.

After sidestepping the 1) Jewish problem by being allowed to stay in Europe as a separate people the Jews achieved 2) regulatory capture with Fatal Embrace and 3) broke the cohesion of the Whites with Culture of Critique it was time for the Jews to achieve 4) state and even global capture by dominating US and by creating the petrodollar system together with the Americans and the Saudis. This article shows how the state capture was achieved in six steps.

5. Honesty Litmus Test: Jewish Libertarians
It was the leading Jewish libertarians such as Ludwig von Mises and Milton Friedman who covered up the Jewish Cuckoo story. They knew the whole truth but covered it up anyway. Exposing the truth would not have been good for the Jews.

5.1. Culture of Statism and cowardice

Why even nationalist intellectuals are quiet about the Jewish Cuckoo story? Simple. They either love the state or are cowards. Often both.

Only by understanding the problem can it be solved permanently. The Jewish Cuckoo story explained the problem so now it is easy to find the solution.

1. Jewish Problem is a Statist Problem

The Jewish Cuckoo story is not about the evil nature of the Jews. It is about the naivety of Whites and the evil nature of the state. Jews are not what drives history but the state. The Jewish elite has just allied with the state and thus managed to become very powerful. The basic problem is not the Jews but the state, i.e. the monopolies of arbitration and money. Destroy the monopolies and the Jewish Problem will vanish.

How to destroy the state if it is now almost all-powerful and has the support of the Jewish media power? First we must understand how the Jewish elite operates. For over 2000 years the Jews have been playing the naive Whites against each other. This article shows each of the turning points of history where Jews have been able to direct the course of history towards ever increasing statism that is now creating the global police state. Only by understanding not only the modus operandi of the Jewish elite but also the watersheds of history is it possible to stop the manipulation of White societies.

But how is it possible to eliminate the state especially if Jews defend it? After all, together with the Wasps they dominate the money machine. It gives the ruling elite enormous resources and power to brainwash, censor or destroy all their opponents. Luckily there is one way to make the citizens raise against the state: Decentralization and privatization through the basic account system.

1 thought on “Illegal: The Jewish Problem Articles Listed and Summarized”