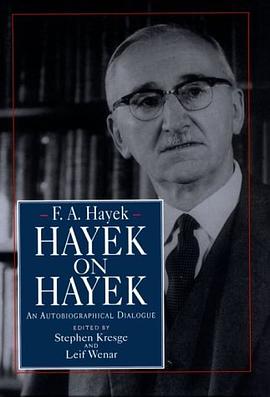 Since biographies of the famous economist and libertarian Ludwig von Mises are very much hagiographical it is important to find more critical but still knowledgeable sources. Luckily Mises’ friend and most famous disciple, Friedrich August von Hayek does often mention Mises the man.

Hayek had a lot of Jewish friends but was non-Jewish with a fully Christian, Gentile and aristocratic background. At the age of 85 Hayek gave a remarkably frank interview where he first time revealed his thoughts on the Jews. He even said that there had been a Jewish problem in Vienna. The interview was published in a collection of interviews Hayek on Hayek edited by Stephen Kresge and Leif Wenar.

QUOTES FROM THE BOOK HAYEK ON HAYEK

So when I came back from the war in 1918, there was not a single one of three great teachers still teaching. In fact, economics was in charge – temporarily and rather comically – of an economic historian who was a socialist and became later the founder of the famous Marxist-Freudian Frankfurt Institute of Social Research. …

Hayek: Karl Grunberg was his name. Later people at the Frankfurt Institute were the representative figures of Marx-Freud traditions in the nineteenth century. He himself was an economic historian inclined in that direction, the sort of scholarly head of something which became a very political institution. But wholly uninteresting to us. (p. 55)

Hayek fails to mention that Grunberg was a Jew and the first teacher of Mises. It was under Grunberg that Mises also published his first book that whitewashed Galician Jewish history. Hayek also fails to note that the Frankfurt School was dominated by Jews. However, he does make it clear that he considered the Frankfurt School nonsense.

Q6: What was the greatest influence you experienced from the Austrian economists?

Hayek: I was a direct student of Wieser, and he originally had the greatest influence on me. I only met [Ludwig von] Mises really after I had taken my degree. ….

It is difficult to overestimate how much I owe to the fact that, almost from the beginning of my university career, I became connected with a group of contemporaries who belonged to the best type of the Jewish intelligentsia of Vienna and who proved to be far ahead of me in literary education and general precociousness. For the first time, a certain ambition to rival my colleagues in their achievement began to have some influence on my work, and since at that time my serious interests were probably more widely spread than theirs, I managed – while keeping pace with them in my legal and economics studies and to get accepted as one of the half-dozen of so outstanding members of the various seminars – to do a good deal more work than even they did.

That I finally not only made up for the year I had lost at school but even beat my closest associates by a few weeks in getting my doctor’s degree in law was one of the minor triumphs which gave me the confidence that I could achieve what I seriously wanted to achieve. …

Not the least gain which I owed to these Jewish or partly Jewish friends of that period is that they were much more internationally minded than my own circle … Though generally these men came from homes which were or had been wealthier than mine, and though no doubt they clung closely together in the struggle against the prejudice they met, they had even then in this prejudice to overcome an obstacle much greater than an equally able Christian of good family, to whom every door was open in Vienna. (p. 57-59)

Comment: Hayek was very conscious of the dominance the Jews had in intellectual circles and he decided to beat them at their own game.

Q6: Was it anti-Semitism which kept Mises from a professorship?

Hayek: Now please be discreet about this point, because it raises very touchy problems, but it is commonly believed, and Mises himself asserted it, that he was never given a professorship because of anti-Semitism. Actually I suspect it not as simple as this, because half the law faculty consisted of Jews, and the problem why Mises didn’t get a professorship is a very peculiar one; and my answer to this, which I don’t think has ever been stated, but I will tell you this, in order for a Jew to get a professorship he had to have the support of his Jewish fellows. Any other Jews who were sufficiently eminent must be supported, because only appointed Jews could get a professorship. But the Jews who were teaching were all socialists, and Mises was an anti-socialist, so he could not get the support of his own fellows. So the reason why he did not get a professorship was not really anti-Semitism, but [that] he wasn’t liked by his Jewish colleagues. This is a very comic story, which I tell you with hesitation, because it’s the sort of thing you cannot prove. I’m quite certain it’s correct.

But the Vienna of the 1920’s and 1930’s is not intelligible without the Jewish problem. Which was not a problem simply of Christians and Jews but a very large middle group in between the two, partly of babtized Jews, partly of Christians who had made friends with the Jews; and there was close contact between the purely Christian group and the mixed group, and again between the mixed group and the Jewish group, but not between the two extremes. I became very much aware of this quite recently, when I was asked whom of the great figures of Vienna I’d known at the time. For instance, Schorödinger, yes, of course; Wittgenstein, yes, of course; and so on.

Then he came to Freud, and I couldn’t possibly have known of Freud. Why? Because he belonged to the really Jewish group, and that was beyond my ranger of acquaintances. I had a great many very close acquaintances in the mixed group, I constantly moved in it, but to have met somebody in the purely Jewish group was so unlikely that being told that because I was a Viennese, I ought to have known Freud, seemed to me absurd. (p. 59-60)

Comment: Shockingly, Hayek uses the very politically incorrect term: Jewish problem. Probably at the age of 85 he did not care anymore. He also notes how:

Read more how von Hayek criticizes the mixed group and tells more about the Jewish Problem.

2 thoughts on “Friedrich von Hayek on the Jewish Problem”