Did Stalin Work for the Rotschilds and Help Stab the Germans in the Back? 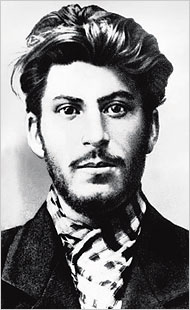 Draft chapter parts of which will be included in article: Honesty Litmus Test. Ludwig von Mises.

Stalin worked for the Rothschilds in strategically important Baku oil fields at their refinery storehouse. Stalin was also very useful as a union man and the representative of the Social Democratic Party and later the Bolshevik part of it. It was important for the Rothschilds to finance communists because they could create revolutions and topple the Tsar.

He [Stalin] first lived with Simhovich, a Jewish watchmaker … “Guess why I got up so early this morning?” asked Stalin exuberantly. ” Today I got a job with the Rothschilds at their refinery storehouse. I’ll be earning 6 abaz daily [1 rouble 20 kopecks].” … Stalin started laughing, almost singing: “I’m working for the Rothschilds!”

“I hope,” joked Kandelaki, “the Rothschilds will start to prosper from this moment onwards!” Stalin said nothing, but the understood one another: he would do what he could to ensure that the Rothschilds prospered. (Simon Sebag Montefiore. Young Stalin. p. 90)

Rothschild banker and a friend of Mises, Felix Somary was handling the contact between the Rothschilds and Stalin.

The Rothschild managing director, David Landau, regularly contributed to Bolshevik funds, as recorded by the Okhrana – whose agents noted how, when Stalin was running the Baku Party, a Bolshevik clerk in one of the oil companies “was not active in operations but concentrated on collecting donations and got money from Landau of the Rothschilds”. It is likely that Landau met Stalin personally.

Another Rothschild executive, Dr. Felix Somary, a banker with the Austrian branch of the family and later a distinguished academic, claims he was sent to Baku to settle a strike. He paid Stalin the money. The strike ended. (Simon Sebag Montefiore. Young Stalin.)

At the turn of the century an oil war was starting between the Rockefellers and Rothschilds. Rothbard says nothing about the Mises family but does note the war:

After the turn of the century, …. Also, at about the same time, a long-lasting and world-wide financial and political “oil war” broke out between Standard Oil, previously a monopolist in both the crude and export markets outside of the U.S., and the burgeoning British Royal Dutch Shell–Rothschild combine.

And since the Morgans and Rothschilds were longtime allies, it is certainly sensible to conclude – though there are no hard facts to prove it – that Teddy Roosevelt launched his savage anti-trust assault to break Standard Oil as a Morgan contribution to the worldwide struggle. Furthermore, Mellon-owned Gulf Oil was allied to the Shell combine, and this might well explain the fact that former Morgan-and-Mellon lawyer Philander Knox, TR’s Attorney-General, was happy to file the suit against Standard Oil. (Murray Rothbard. Wall Street, Banks and American Foreign Policy. 1984. p. 14. Read online. Emphasis added.)

Did Rockefellers offer the Mises family an alliance? Unlikely, since the Mises family were Jews squarely in the Rothschild camp and thus probably allied with the Shell combine. But why fight if you can make a deal? As noted previously Stalin was working for the Rothschilds as a union man and a gangster. Could it be that the deal was to destroy the Tsar and used Stalin as the henchman in Baku?

Rothschild and the Rockefellers probably realized that instead of competing with each other they could join forces and destroy the biggest oil producer in the world, Russia. Or at least cripple it enough so that its exports would collapse. Then the Rothschilds and the Rockefellers could divide the world markets. It is the old story. When there are three big players the two turn against the one. This seems to be exactly what happened when in 1905 Jews financed Japan to attack Russia. At the same time Stalin and his gangsters set alight the Baku oil fields.

The 1904 collective-bargaining agreement was a major victory for Russian oil workers. It seemed to everyone that this progress in the social sector had considerably lessened the level of tension in the working class environment, and nothing portended the complications that would soon arise in the oil fields. However, the events of the first Russian revolution of August 1905 burst forth on the Absheron Peninsula [Baku], writing the most tragic pages in the history of the domestic oil industry.

The devastation that occurred over several August days on the Absheron Peninsula, when oil workers set industrial sites on fire in acts of deliberate sabotage, plunged the Russian oil industry into a deep, long-term crisis. What was the main cause of the tragedy of August 22–25, 1905? Unfortunately, even a hundred years later, we still do not have an exhaustive answer to this question. …

Overall, we should emphasize that the tragic events of August 1905 set Russia back nearly a decade in terms of production level. Russian petroleum products exports fell 57%, from 14.3 million barrels in 1904 to 6.2 million barrels in 1905. A few years later, in 1908, Russian petroleum products exports were only 18.6% of American exports. [Previously they had been almost equal.]

The former head of the Caucasian Excise Tax Administration, Ludwig Perschke, cited the following figures, which speak volumes: “The loss of Far East markets was especially painful for the Baku industry, since the huge populations of India, China, and Japan offer a field for the widest development of kerosene trade…. There have been no deliveries to China since 1906…. Russia’s share of India’s total kerosene supply has fallen from 78% to 2%.”55

As for the pride of the United States, the Standard Oil Company, it regained its dominant positions on the European and Eastern kerosene markets and opened up the enormous Chinese market for its petroleum products. Meanwhile, Great Britain, on the eve of the merger of Shell Transport and Trading Company with Royal Dutch, also gained a guaranteed sector for petroleum products sales in Asia and the Far East. But its principal gain was the opportunities it created by snapping up the ruined fields on the Absheron Peninsula literally for a song, paving the way for a massive expansion of British capital into the weakened Russian oil industry. (Vagit Alekperov. Oil of Russia. Past, Present and Future. East View Press 2011. P. 81-82)

The perfect deal! Plus the Wasps didn’t mind because the British Empire had been afraid of Russian expansion in Asia. The Anglo-American establishment (Wasps, Jews and Rockefellers) was now in harmony. Rothschilds were ecstatic. They had thought the Tsar a lesson and were now an integral part of the establishment. But then something happened. The French did not like to see their ally Russia to become weaker. The French explained to the British that after loosing to the Japanese the Tsar was now willing to abandon his expansionist plans in Asia and join Britain in dividing up the world. So the Entente came into being and Jew-friendly Germany and Austria were surrounded.

The Rothschilds were horrified and tried to stop the alliance between Britain and Russia. So there was never any official alliance but it did not matter. Winston Churchill and the Wasp aristocracy made sure that Entente kept together when the First World started. But then the Jews and Rockefellers stroke back by preventing America joining the Entente.

By 1916 the war was in a stalemate between the Entente and Central powers. Neither side could win and so serious peace negotiations started. It was at this crucial moment that both the Rothschilds and the Rockefellers had an idea. If the price was right they would push America to join the war on the side of the Entente.

What would that price have included? For the Rothschilds it certainly would have included toppling the Czar and gaining Palestine. For the Rockefellers it would have included the oil fields of Baku, Middle East and maybe also Galicia. Rothschilds and the Rockefellers would benefit if both the Tsar and the Central powers would fall. A very difficult combination but curiously this is exactly what soon happened. After the Tsar was toppled with British and French intrigue, America joined the war and the Central powers (Germany and Austria) were defeated. Maybe Hitler was right when he complained about the Jewish stab in the back.

6 thoughts on “Did Stalin Work for the Rotschilds and Help Stab the Germans in the Back?”