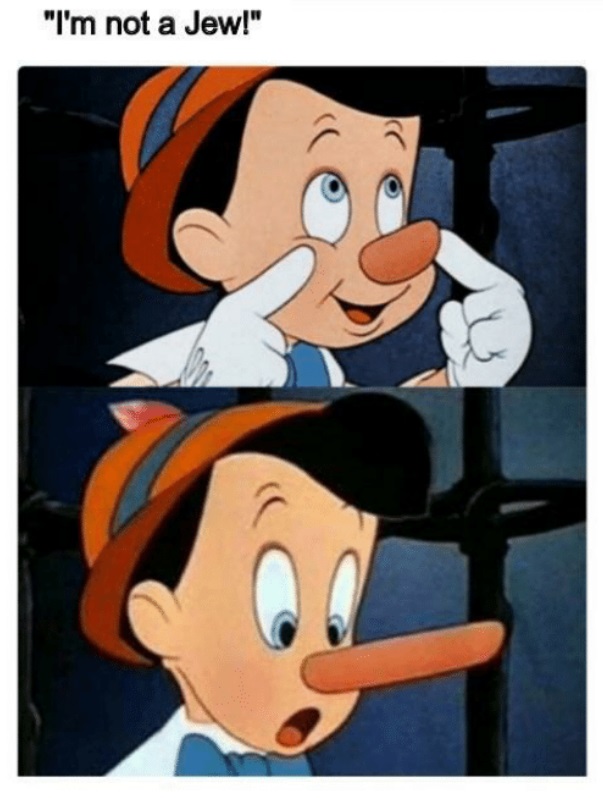 This article is part of the Jewish Honesty Litmus Test series. Part I can be found from here. This second part will be integrated into the first part.

The biographical method is sometimes insufficient if the Jew has burned all his personal papers and hidden his past well. Then usually the question method is used and all the writings of the Jew checked. However, what if the Jew has always been very silent about Jews also in his writings? Often Jews do not like to talk about sensitive historical subjects. Questions make them especially nervous because the relationship between Jews and Whites has been full of conflicts.

However, you can quite easily determine the honesty of a Jewish libertarian. Just check if and how selectively silent and dishonest he is about the four stages of White history:

1. The Jewish manipulation of the White nations (Cuckoo nationalism)

2. Influence of Jews on the development of statist interventionism and the money machine (Fatal Embrace)

3. Demonization of Whites (Culture of Critique)

But what if the leading Jewish libertarian has simply refused to talk and write anything about the Jews? What if Jews do not even seem to exist for him except as victims of irrational anti-Semitism? Obviously we can then infer that something is very wrong and the Jew is dishonest. We can even determine his dishonesty on a severity scale.

The severest dishonesty is to make outright lies. For example, Milton Friedman claimed that in Medieval times Jews supported free market and did not often receive/buy from kings various privileges such as slave trading, tax farming, cartel and monopoly licences. However, Friedman rarely made such obvious direct lies. So he was not an extreme liar. He was too intelligent for that. Mostly he used the other dishonesty techniques mentioned below.

Next level of dishonesty is to deny an obvious fact after someone had proven it. For example, Ayn Rand denied that Bolsheviks initially were led or at least dominated by Jews. This despite the fact that she herself had lived in the Soviet Union and certainly knew the truth. However, her denial seem to have been more definitional than explicit because she refused to discuss the subject in detail. She seemed to deny that a communist can be a Jew and therefore Jews could not be involved in communism. In this sense her denialism was extreme and in some ways even worse than outright lying.

Next level of dishonesty is to hide an obvious fact. For example, Ludwig von Mises hid the fact that Jews dominated the socialist movement in Austria and many other countries. This despite the fact that he himself knew many of the leading socialist Jews. However, Mises hid the facts by simply never identifying in his books who is a Jew and who is not. Unless, of course, they were victim of “anti-Semitism”. This double standard made the hiding even worse.

Next level of dishonesty is to purposefully ignore and disregard an obvious fact. For example, Murray Rothbard repeatedly ignored that many of the creators of the FED such as Jacob Schiff and the Warburgs were Jews. He just called them Germans. This despite the fact that he knew full well that they were Jews, probable fronts for Rothshilds and belonged to the ruling elite. Rothbard wrote many books about banking and history in general but almost always ignored the role of the Jews. Whenever he mentioned a Jew he failed to identify him as such. However, during the last few years of his life he started noticing Jews but then he suddenly died.

Next level of dishonesty is to obfuscate by being purposefully confused and illogical. For example, Ludwig von Mises claimed that classical liberalism / libertarianism adheres to political supercentralism when it actually adheres to political decentralism. He claimed that a free society can be created through huge supercentralized multinational political unions like Eastern European Union and Western Union that also includes America. He also claimed that even in America there should be conscription. This despite the fact that classical liberalism / libertarianism has always and absolutely opposed conscription.

This sort of illogical obfuscation is obviously dishonest because it changes the meaning of words and terms such as libertarianism. Moreover he seems to have started this illogical obfuscation after he became convinced that European, Nazi, Soviet and Arab “anti-Semitism” can be stopped only by big militarily strong supercentralised multinational political Unions. Obviously he was being dishonest to help the Jews.

By studying the writings of the leading Jewish libertarians through the four litmus question topics we can find out whether they were honest or to what degree they were dishonest (lier, denialist, hider, disregarder, obfuscator) and thereby determine to what Jewish group member category they belong.  Applying the litmus test to the five most prominent libertarian Jews gives the following preliminary results: