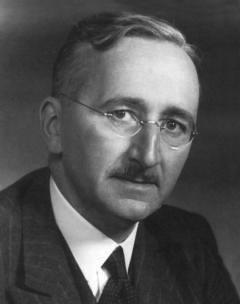 This article is part of a series that studies if five famous Jewish libertarians used libertarianism to serve Jewish group interests.

Friedrich von Hayek (1899-1992) was a famous libertarian who belonged to the Austrian School of economics. In 1974 he received the Nobel Prize.

Read part I. Friedrich von Hayek on the Jewish Problem.

Hayek is often considered one of the most famous libertarians. In his almost universally acclaimed study of the five most important libertarians Brian Doherty writes:

Five thinkers form the spine of the story this book tells, five people without whom there would have been no uniquely libertarian ideas or libertarian institutions of any popularity or impact in America in the second half of the twentieth century. Those five are -in the order which they are discussed in this book – Ludwig von Mises, Frierich A. Hayek, Ayn Rand, Murray Rothbard and Milton Friedman. Four men and one woman; four Jews and one Catholic.. (Brian Doherty. Radicals for Capitalism: A Freewheeling History of the Modern American Libertarian Movement. 2007)

Of the top five at least four are ethnically Jews so naturally many have wondered if Hayek is also ethnically Jewish. Especially since his famous cousin Ludwig von Wittgenstein was Jewish. Surprisingly, it turns out that Hayek is not Jewish at all. In fact, he seems to even resent the the fact that many have suspected him of being Jewish. Hayek explained this in an 1983 interview.

Hayek first points out that his cousin Wittgenstein already had a quite nihilistic attitude as a young man. This partly explains his nihilistic philosophy in the Tractatus.

Interviewer: Can you tell us something of your relationship with your cousin Ludwig Wittgenstein?

Hayek: I can’t say I knew him well, but of course I knew him over a much longer period than anybody now alive [in 1983]. My first recollection goes back to a day on furlough and leave of absence from the front …. I now know that at this moment returning to the front, he must have had the manuscript of the Tractatus in his rucksack. But I didn’t know it at the time. But many of the mental characteristics of the man were already present, as I gathered in this night journey from Bad Ischl to Innsbruck, where the occasion was his contempt for the noisy crowd of returning young officers, half-drunk; a certain contempt for the world. (Hayek on Hayek. An Autobiographical Dialogue. Edited by Stephen Kresge and Leif Wenar. 1994 p. 60.)

Hayek’s family was aristocratic and quite rich though not as rich as the Wittgenstein family. The families were quite close friends. This is why so many people assumed the Hayek family was also Jewish.

Then I didn’t see him [Wittgenstein] for a long time, but I heard a lot about it because his oldest sister was a close friend of my mother’s. They were second cousins, and she came frequently to our house. There were little rumours constant about this crazy young man, but she strongly defended Wittgenstein, and that’s how I heard about him. But I came to know him much later in Cambridge. (Ibid. p. 60)

Hayek implies that Wittgenstein was first quite happy that the Soviets had defeated the Nazis and occupied Vienna. This sort of attitude was common among the Jews. However, Wittgenstein revealed to Hayek how he was very dissappointed with the Soviets. In other words, he first had his Jewishness blind him to the enormous crimes of the communists. Soon, however, Wittgenstein realized that he had spoken too much about his Jewish attitudes and did not want to talk to Hayek anymore.

We were both returning from Vienna … And all during the first half of the following morning we were – as as he had finished his detective story – first talking about Vienna and the Russians in Vienna, and this led to talk about philosophy and ethical problems; he was bitterly disappointed about what he had seen of the Russians then. And just when it became interesting, we arrived at the port for the ferry. And although he said, “We must continue this,” he apparently regretted having gone out of himself, because on the ship he was not to be found, and I never saw him again. (Ibid. p. 61)

Next Hayek uses a very politically incorrect term: Jewish problem. Not only that but he says that it would have existed even without the immigration of primitive Jews from the east. Furthermore, Hayek emphasizes that Wittgenstein was three-quarters Jewish because then he can point out that they shared only the one-quarter ancestry that was not Jewish.

Wittgenstein was three-quarters Jewish. But the family was completely established in Vienna society, as in general you know. The Jewish problem in Vienna became acute only as a result of emigration from Poland. (Ibid. p. 61)

Hayek emphasizes that his family had no Jewish ancestry at all and was purely a Gentile family. Hayek also seems to say that he did not move in Jewish circles before he went to the university. Then he points out the clannishness of the Jews and how they were not prepared for honest discussions about Jews.

Hayek was clearly upset that Jews had an enormous double standard. They were allowed to speak and criticize Gentiles very strongly but Gentiles were not even allowed to notice who is a Jew. This was no trivial problem because Jews often tried to manipulate Gentile society with the Fatal Embrace and Culture of Critique. Jews were very powerful especially in Austria where they tried to organize a socialist revolution. Not even allowing to notice who is a Jew was very insulting especially in those days and Hayek was no fool.

Interviewer: So you regarded as this mixed group–

Hayek: Not my family, my family is on the purely Christian group; but in the university context I entered the mixed group. And there were several things which I must confess I resented among our Jewish friends. The worst was that I was not allowed to speak about Jewish thing; they did that all the time. Even the theme of “Has he any Jewish accent?” was constantly discussed among them; if I would have a said a word about it, it would have been bitterly resented. (Ibid. p. 61)

Hayek was upset that people thought him of being a Jew. He went to great lengths to emphasize that his family had no Jewish blood whatsoever. Hayek was proud to be a pure German aristocrat and he always was a bit suspicious of the Jews.

In Vienna there was certain amount of speculation in the Jewish community [about whether my family was Jewish]. One of the things that amused me: My younger brother Heinz who in every other aspect had a face that could be much less Jewish than mine, actually had dark hair, black hair; and it so happened that in one of the summers that I spent in the Schwarzwalds’ summer home, I happened to overhear a conversation among the Jewish circle, when my brother arrived, to the effect that he looks Jewish.

My own curiosity about this led to me to spend a great deal of time researching my ancestors. I have full information for five generations in all possible directions. And since they all happened to be first-born children, there’s more certainty that they derived from their parents; so as far back as I can possibly trace it, I evidently had no Jewish ancestors whatever. (Ibid. 61)

If still in the 80s Hayek was this happy not to have any Jewish ancestry and this suspicious of Jews just imagine the attitude of other Gentile economists towards Jews hundred years ago.

Hayek always emphasized that he was not a student of Mises but of the Gentile Friedrich von Wieser. Probably also Wieser had a suspicious attitude towards Mises. This attitude explains why the first and second generation of the Austrian School including Menger, Böhm-Bawerk and Wieser were not very supportive of Mises but always kept a distance. They respected his scientific work but did not trust a Jew.

5 thoughts on “Was the Libertarian Nobelist Friedrich von Hayek Jewish?”