TIK: Why Germany lost WWII even if Hitler had the right strategy 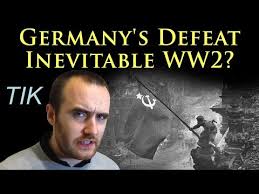 German logistics of WW2 were terrible. In fact, the war on the Axis-Soviet Front may have been determined by the poor logistics of the Wehrmacht

The lack of oil and rubber plays it part, but the Germans messed up the use off their trains and railroads. The result was that they could only so far into the Soviet Union before they had to stop. Let’s discuss this.

Timestamps – 00:15 Todd R Smith – were chainsaws used in Russia? Why were “corduroy roads” roads surfaced with cut logs, not used?

30:13 Steve Switzer – Despite bad logistics, why was the wehrmacht still formidable until 1943?

37:36 Robert Henry Illston – how detrimental to the Axis/German supply/logistic chain were acts of sabotage?

TIK notes that logistics doomed Barbarossa. However, he fails to note that Nazi semi-socialist price controlled economy doomed the logistics because it prevented the price system from allocating resources efficiently.

This would not have been crucial if the greatest capitalist country, USA had not been supplying the Soviets.