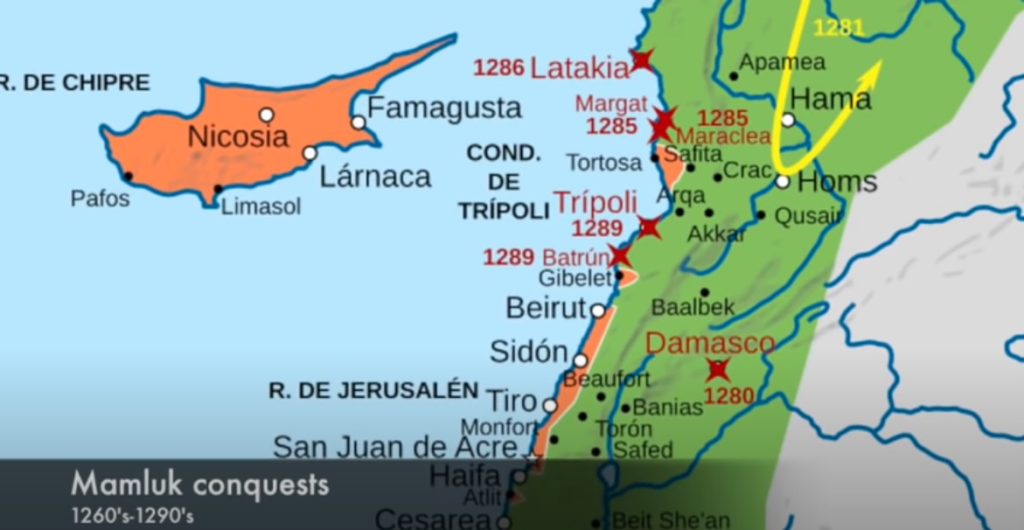 Mameluks had demolished almost all castles and walled cities they had taken from the crusaders in order to deter any attempts at recapture and, most of all, to put off any future crusade being planned. However, at the same time that they destroyed these trading centers they destroyed the economy of the holy land. Only a despotic ruler would do that. Consequently for the next 600 years the Holy Land became a a poor semi-desert with hardly any trade and a very small population.

But not all crusader stronghold had yet been conquered. Next in line for conquest was mighty city of Acre, long the base of Crusader armies and the most important naval base. Acre was the place of final retreat in times of trouble, and capital of the Latin East. (Ancient.com)

Crusaders dispatched a peace delegation, led by Sir Philip Mainebeuf, to Cairo; the delegation was imprisoned. Khalil set out from Cairo in March 1291.

The assembled Mamluk army greatly outnumbered the Crusaders. Khalil called upon Syria to reinforce his Egyptian army. A significant portion of the troops were volunteers. The army included a substantial artillery train drawn from fortresses across the Mamluk empire. Hama sent the enormous catapult “The Victorious” (المنصورى, Al-Mansuri.) Another large catapult was “The Furious” (الغاضبة, Al-Ghadibah.) There were also lighter mangonels called “Black Bulls” (الثيران السوداء, Al-Thiran Al-Sawda’a.).

The Crusaders appeals for aid met with little success. England sent a few knights, including Otto de Grandson of Savoy. The only noteworthy reinforcements came from Henry II of Cyprus, who fortified the walls and sent troops led by his brother Amalric. Burchard von Schwanden suddenly resigned as Grand Master of the Teutonic Order and left Acre for Europe; he was succeeded by Konrad von Feuchtwangen. The only major contingent to leave were the Genoese, who concluded a separate treaty with Khalil. Many women and children were evacuated from Acre to Cyprus in March.

Acre was defended by an inner and outer wall, with a total of twelve towers built by European kings and rich pilgrims.[23][24][25] 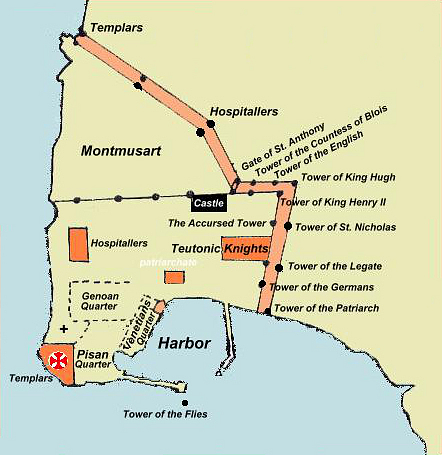 The Mamluk assault was preceded by weeks of preparation. By 18 May, multiple towers and parts of the wall were collapsed by undermining, and sections of the fosse filled in. The collapse of the Tower of the King was particularly demoralizing among the defenders, and the evacuation of women and children accelerated.[26]

The Mamluk army assembled before dawn on 18 May[26] and attacked the entire length of the wall to the sound of trumpets and drums carried on 300 camels.[27][28] The Mamluks poured through the breaches; by 9 a.m. the outcome seems to have been beyond doubt.[29]

The Mamluks captured the Accursed Tower on the inner wall[30] and forced the Crusaders to retreat to the Gate of St. Anthony.[31] On the Montmusard walls, the Lazarists remained while the Templars and Hospitallers[32] made a failed attempt to retake the Accursed Tower.[33] The redeployment allowed the Hamans to break through the Montmusard walls and kill the Lazarists. The Mamluks gained more penetrations as the Crusaders abandoned the walls.[32]

The Mamluks pushed into the city, looting[32] and massacring any they encountered[29][nb 3] Organized Crusader resistance collapsed, and the retreat to the harbour and the ships was chaotic;[29][32] wealthy refugees offered exorbitant sums for safe passage.[nb 4][nb 5] Henry II and Jean de Villiers, Grand Master of the Knights Hospitaller, were among those evacuated. The evacuation was made more difficult by the poor weather.[29]

By the night of 18 May,[37] Acre was in Mamluk hands, except for the seaside Templar fortress at the western tip of city.[29] The fortress contained four towers, and within were remnants of the Templar, Hospitallers, and Teutonic Knights, and thousands of civilians.[38][39] The fortress held out for ten more days, during which Matthew of Clermont, a Hospitaller marshal, was killed.[29]

On 20 May, the tower held by the Templar, led by Peter de Severy, asked for amnesty.[38] Sultan Khalil agreed to allow the Templars to leave without weapons for to Cyprus. The agreement collapsed when the Mamluks supervising the evacuation inside the fortress were killed by the Templars after trying to enslave women and children.

Further offers of amnesty were rejected by the Crusaders.

Templar Thibaud Gaudin and a few others left the fortress under the cover of darkness, taking the Templar treasury with them to Sidon.[nb 6][citation needed][39]

On 28 May, the final tower surrendered; Mamluk mines were prepared to destroy the tower making further resistance useless. Many of the surrendering men were beheaded, with the women and children being enslaved. The tower collapsed after prisoners and booty had been removed; according to Mamluk accounts, a few sightseers and looters were killed.[39]

Short documentary on the epic final battle of the Knights Templar against the Mamluks at the Siege of Acre in 1291.

Fall of Acre can also be seen in the TV-series Knightfall.