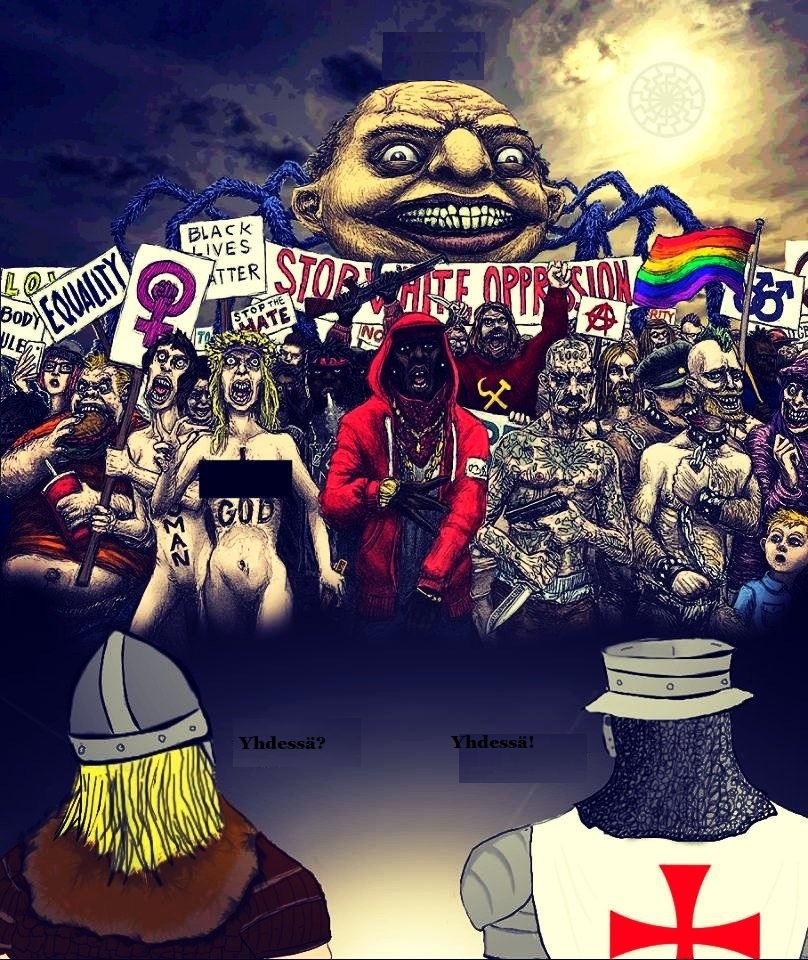 Historian Marco de Wit is the chairman of the Finns First Party (SKE) and the chief editor of the Finnish publication Laiton Lehti and the English language publication The Holy Crusade News.

Marco is a paleolibertarian and has published many articles at Unz.com, Occidental Observer and LewRockwell.com. He has also organized and spoken against Islamization, Zionism and the evolving police state in over 100 demonstrations in Finland and Sweden.

Marco has been physically attacked many times by Antifa anarchists and Islamists so that he has ended up twice in a wheel chair. However, he has not given up but continues to fight for freedom of speech and other civil rights.

He has also been a candidate in municipal, parliamentary and European elections. Not because of desire for political office but a way to spread the word on the evils of censorship, Islamization, Zionism, cultural Marxism and the root of all evil, fractional reserve banking.

Now Marco also speaks against the Covid/Corona hoax and opposes lockdowns, mask mandates and poisonous vaccination programs. He seems to be the only election candidate in Finland and maybe in the world who loudly opposes the root of all lockdown evil: Virus hoax.

There are no pathogenic viruses any more than there are evil spirits out to get us. The existence of Covid-19 has never been proven any more than the existence of unicorns. Covid Cult is just an excuse to pin the blame of the coming bank crisis to an nonexistent virus so that people would not rise against the monopolist private money machine, i.e. fractional reserve banking. It is especially important for Zionists and Israel to protect the money machine because it finances their New World Order led by U$Srael and the Wasp-Jewish ruling elite.

The virus hoax is only a small part of a much bigger Cuckoo hoax run by extremist Zionists who are creating a global police state. Here is a short summary.

Marco was also the first and still seems to be the only one who has revealed how Jeffrey Epstein and Ghislaine Maxwell were part of an Israeli led international pedophile ring that extorts leading politicians, businessmen and scientists.

Marco has also written a book that explains how Israel rules the world.

The situation is now very dangerous for Marco because the Islamists, Zionists, Antifa and the political police have joined forces and together try to silence him and other dissidents of the Finnish truth movement. Marco’s 13 channels in Youtube have all been deleted without any explanation.

The first time in Finnish history the state television refused to send election panel program direct because they were afraid what Marco would say. When Islamists and anarchists started a riot during a demonstration Marco was leading police just left him and the demonstrators in the middle of a riot unprotected. The political Helsinki police is literally trying to kill Marco as various videos prove. (Soon coming a special video)

Marco is now the chief editor of the Holy Crusade News that also supports the truth movement candidates in local elections.

You can contact Marco through our email [email protected]onmail.com

If you know any other election candidates who oppose the Cuckoo and virus hoaxes please inform us and we will add their info on this page.

The hoaxes must be stopped or the Orwellian future is soon here.

All we have to do is to spread the word about hoaxes. The power of an idea can be enormous. Support truth and it will set humanity free!