Who Rules The World? Top 10 Censored Books From The Rationalist Grand Narrative

Those who rule the world want to hide the fact by promoting schools of thought that not only make it more difficult to study the ruling elite but also make it easier to rule over us. This is why the ruling elite promotes the relativist paradigm (empirism and historism) in philosophy and its sub-schools such as neoclassical school in economic and political science.

What the rulers fear most is a rationalist paradigm and the radical Austrian school that shows how the emperor has no clothes. Here we present the most important rationalist books in deductive manner by starting from philosophy and then continuing through praxeological ethics, economics and politics into economic history and finally in more empirical fashion to biology, world history, medical science and sociology. At the end everything is brought together into a simplified grand narrative.

The ruling elite has force-fed us their relativist narrative so it is time to spread the counter-narrative or rather the original common sense Grand Narrative that 100 years ago everybody understood almost instinctively. Thanks to the latest scientific breakthroughs in many fields we can now more efficiently defend this correct narrative.

All of the ten books are politically incorrect. Thus they have been blackballed and demonized by mainstream science. Some have even been outright banned from Amazon.

On Praxeology and the Praxeological Foundation of Epistemology by Hans-Hermann Hoppe
The book includes the essay Economic Science and the Austrian Method where rationalism is defended against relativism (empirism ja historism). It shows how mainstream relativist philosophy and social science is in many ways absurd. It is possible deduce from action and argumentation axioms most of the social sciences. A Grand System starts from philosophy and proceeds through ethics to economics and politics. Truth is certain, beautiful and easy to understand for the intelligent layman. Hoppe introduces the grand system here.

THEORY OF MONEY AND BANKING

THE HISTORY OF THE RULING ELITE

Murray N. Rothbard explains how three dynasties (Morgans, Rothschilds and Rockefellers) created their own money machine, the FED and now rule the world.

Rationalism does present us with the basic logical tools to understand human interaction, i.e. ethics, economics and political science. However, at the same time it understands that pure logic is not enough. You need also empirical knowledge about people and events. Even if it would consist of illegal “hate facts” and “hate speech”.

The book includes a famous chart which is nowadays considered hate speech.

Rushton’s book is partially based on the work of Richard Lynn who measured the IQs of different races and nations. This map is based on his work. 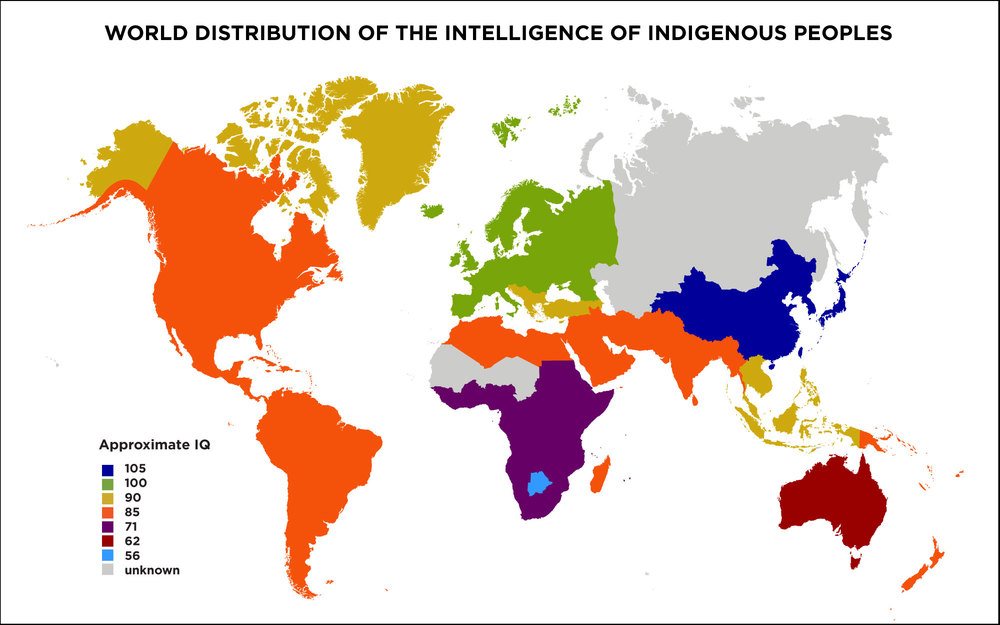 Daniele Ganser explains how Western democracies organised a false flag terror campaign that killed hundreds of their own citizens and then blamed communists.

An even better book is Valtiot ja terrorismi (States and Terrorism) which brings together all the studies that show how both organized crime and terrorism are effectively state sponsored. In other words, the deep state uses criminals and terrorists to destroy its enemies and advance its interests. However, the book has been published only in Finnish.

->  periodic invasions from the north replenished the ruling white elite

-> Rome later collected most of the Hellenistic pieces together again

– marriage regulated, only responsible people should have children

-> Division of power between kings and Church

-> arbitration instead of monopoly judges & legislation

– hundreds of independent principalities, city states (Hansa) and military orders like the Templars

– small armies since had to use semi-independent vassals or mercenaries

– Crusades with decentralized and voluntary armies for faith and profit

– close to creating the Industrial Revolution already in the 1200’s!

If Europe was close to liberty why then statist centralisation, depression and the consequent black death in the 1300’s?

-> maintaining the status quo will lead to freedom

– freedom is natural for Europeans  so why then increasing centralization in the 1300’s?

– in Eastern Europe natural order was destroyed by Jews, Muslims and Mongols

-> fatal embrace: Hostile Jewish elite vs. the people led to periodic pogroms, expropriations and expulsions of the Jews

=> king now so powerful that he could centralize power with legislation

-> in England a battle between the king and the parliament

– balance of power between king and the aristocrats

-> decrease of taxation during Elisabeth I

– Hanoverian-Whig one party oligarchic rule from 1715

– however, country Whig and country Tory rule in the countryside and Jacobite rebellions 1708, 1715 and 1745 maintained a balance of power that maintained peace and decreased taxes and cartels during Walpole-Pelham rule

1. Separation of church and state

Clark (1985) depicts England before 1828 as a nation in which the vast majority of the people believed in the divine right of kings, and the legitimacy of a hereditary nobility, and in the rights and privileges of the Anglican Church. In Clark’s interpretation, the system remained virtually intact until it suddenly collapsed in 1828, because Catholic emancipation undermined its central symbolic prop, Anglican supremacy. Clark argues that the consequences were enormous: “The shattering of a whole social order … What was lost at that point … was not merely a constitutional arrangement, but the intellectual ascendancy of a worldview, the cultural hegemony of the old elite.”[6]

– Jews had a bad reputation (blood libel, Jack the Ripper)

2. Extension of the vote and the right to stand for office

=> democratization even worse than monarchy since opposition to centralization is decreased

-> they protect their money machine by creating ever bigger monetary, economic and political unions that can afford ever bigger bail-outs

-> globalism must be destroyed with secession, decentralization and discrimination of SJWs

Who rules the world? RWE, The Rockefeller World Empire!

1 thought on “Who Rules The World? Top 10 Censored Books From The Rationalist Grand Narrative”